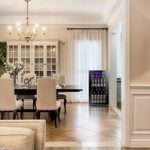 If you keep your wine on the countertop for a prolonged period of time or in a regular fridge, its color and flavor will degrade. That’s your hard-earned money down the drain. Instead of enjoying a bottle of wine the way its producer had intended, you’re now stuck with one that has gone bad, all because you didn’t have the proper storage space for it.

That’s because temperatures deep into the earth are much cooler. And of course, it’s darker under there too. But we’re pretty sure the majority of wine lovers don’t just conveniently have wine cellars at their disposal.

So how are they storing their wines properly?

A wine fridge is the modern solution. These electric wine coolers are nifty appliances that look like your mini-fridge’s more stylish older brother. They’re designed to keep your wines at perfect aging and serving temperatures, all the while being a focal point for any sophisticated kitchen or home bar.

One of the brands that consistently deliver quality wine coolers is Antarctic Star.

Antarctic Star wine cellars have been going left and right because customers can’t stop singing praises about them.

They come in multiple configurations, so there’s always something for every level of wine enthusiast. You could opt for as low as a 17-bottle capacity or as high as a 36-bottle one. It all depends on what size collection you plan on building.

These don’t work around the clock, so you can save quite a bit on your monthly power dues.

But despite having compressors, which are known to produce vibrations that disturb wines’ compounds, they keep the vibrations to a minimum. Less to no vibrations minimize sediments, which you don’t want floating around in your wine glass. No vibrations also mean quiet operation. So you don’t have to worry about being bothered by a constant humming noise reverberating from your kitchen.

Getting an Antarctic Star wine cooler also assures that you’ll get full control over temperature and humidity, which have to be set specifically for different kinds of wines. All their models look sleek and well-built because they were purposefully designed and made with sturdy materials.

You’re not going to be disappointed with any Antarctic Star wine cooler because they’re built to last and function exceptionally. You could get one that’s freestanding or even one that’s intended to be built into one your kitchen counters.

Not only can store your wines in them, but you could also use it for other beverages you enjoy like beers and sparkling waters.

It’s just the perfect way to keep your more valuable drinks in prime condition. Don’t overestimate your kitchen fridge because it’s not going to able to house your wines the way an Antarctic Star wine fridge can. Always use the designated appliance to do the job for you. That’s what the folks over at Antarctic Star believe.

Welcome to THE WINE CELLAR DIVA review of the  /Cabinet Refrigerator Small Wine Cellar, in this article we will tell you about this small wine chiller features, what people are saying about the … END_OF_DOCUMENT_TOKEN_TO_BE_REPLACED