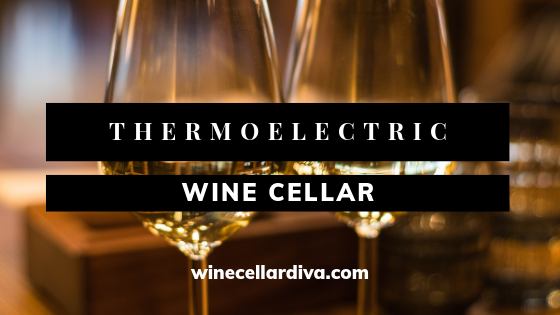 Wine collectors would often dream of having an underground wine cellar of their own. Who wouldn’t want to be able to store their wines at just the right temperature for them to maintain their quality and to age them properly? Unfortunately, not everyone has the money or the space in their homes to have an underground cellar. Fortunately however, wine collectors everywhere can get a thermoelectric wine cellar.

WHAT THERMOELECTRIC WINE CELLARS DO

Thermoelectric wine coolers are machines that are designed specifically for wine cooling and storing. They can maintain a constant temperature that is ideal for the specific type of wine that is being stored in the interior of the unit. But what makes them different from a traditional refrigerator and a compression type wine fridge is the technology that it uses to keep the wine constantly cool.

HOW DOES A THERMOELECTRIC WINE CELLAR WORK?

Thermoelectric wine fridge units use a principle called the Peltier Effect. Unlike traditional cooling systems, thermoelectric technology works by having two pieces of metals fused together. When electricity runs through, one side becomes hot, while the other becomes cool. It is the cool side that makes the interior of the wine fridge cold, keeping the wine safe from oxidation.

THERMOELECTRIC VS COMPRESSOR WHICH IS BETTER?

The main advantage wine fridge thermoelectric units have is that they do not have moving parts, which makes them very quiet, and that they do not need to have circulating liquids that can leak and cause other problems. This allows thermoelectric fridges to be sleek, compact, and very energy efficient. The drawback however, is that thermoelectric units are vulnerable to being affected by outside temperatures, which is why where it is placed in a home or location is also very important. In addition, they are not as effective when used to cool a bigger area or to store a larger amount of wine bottles.

WHAT SIZE OF THERMOELECTRIC WINE CELLAR TO BUY?

Looking to purchase a single zone thermoelectric wine cellar? There are some things to consider in order to get the best one for you. This includes the space you are going to use it, size, capacity, … END_OF_DOCUMENT_TOKEN_TO_BE_REPLACED

This 18 Bottle Dual Zone Thermoelectric Wine Cooler tackles all the major problems you have when purchasing a wine cellar/cooler to keep your favorite red AND white wines stored optimally. … END_OF_DOCUMENT_TOKEN_TO_BE_REPLACED

We use cookies to ensure that we give you the best experience on our website. If you continue to use this site we will assume that you are happy with it.Ok